WHY DOES LIKING CATS MAKE YOU "A CRAZY CAT PERSON"? 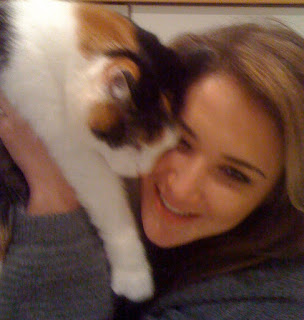 Yes I use them.

If you are a male wearing skinny jeans, drinking PBR and being pretentious about music, I might label you “a hipster”.

If you are leaving anonymous comments on my blog taking my jokes too seriously but not manning up to who you, I might label you “an asshole”.

If you are wearing two pairs of glasses at the same time, criticizing my fashion sense and speaking with a Brooklyn accent that you are in denial of, I might label you “my Mother.”

But the one label I don't understand is why does my liking of cats make me  "a cat person"?

There's not a dog equivalent to a cat person.  People who like dogs aren't labeled, "Dog People” they’re just called “people,” “normal” or “American”.  I sense a tad of discrimination here.

I was raised with cats.  My first pet was Mikki, she was a beautiful calico, we shared a love for muenster cheese, waking up early, and watching Sesame Street together.  She died when I was four years old.  It took my parents a month before they told me she was dead, they always sheltered me. After the bad news they took me out for Mexican food and I forgot all about it.

Three years later they bought me another calico Noel, born April 26th, called Petunia by her previous owner (why do I know this?!)  Two years later we got Nellie. No, not named after the rapper, named after the lead character in South Pacific (I’m a theater nerd).  Yes, they're names are too similar, but we can easily tell them a part.  Nellie is fat.  Almost like the cats on this website:

Nellie is so fat that we had to get her shaved, because she was too fat to lick clean her entire body and her hair was clumping up.  She also likes to play the piano. One time the piano top slammed on her tail and she broke it.  Another time she swallowed plastic and had to have surgery.  In conclusion, Nellie is a dumb fat cat.

Sometimes I think my parents like my cats more than me.  A few years ago they did one of those photo christmas cards.  The picture of my cats was three the size of my picture.  I know I moved out out for college, but seriously Mom and Dad?

Also I think my cats (who are both female) are lesbians.  They spoon:

Any way, I prefer cats to dogs.  I find them mysterious, intelligent (except for Nellie), and I like that you have to earn their affection.  Dogs will slobber and dry hump anything that graces their presence.  People confuse this preference with me hating dogs.  I don't hate dogs.  Just sometimes dogs intimidate me.  I wasn’t raised around dogs, so often I'm not sure what to do with them.  What do you do when a dog jumps all over you?  Do you give it a high five?  Pet it?  Take it to brunch after?  I just get confused.

The other thing I noticed about liking cats, is most straight guys like dogs.  It's like a HUGE deal breaker to like cats. What's with that?  I'm not a crazy cat person!

Okay, yes, I have six cats, yes, I love them like children, and yes, no man can compare to my love for cats.... but why does this make me crazy?

And that was joke.  I have two cats, they live with my parents, sometimes I think they're cute, and I like men more than them.

Am I alone here?  Any fellow “cat people” that are not crazy?