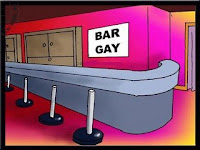 "May by Gay!,"  I exclaimed when I got accepted into my college which has a reputation of having an overwhelming gay population.   My friends all roared with laughter.  "It's Gay by May, you idiot, are you sure you got into college?" My gay best friend told me.
My gay best friend loves to drag me to gay bars ---- figures.
We've been doing it since we were 15.    At the time it was perfect,  our obvious fake IDs were never questions,  it's the best place to get the fruitiest and strongest drinks, compliments on your shoes,  and no creepy older guys hitting on you.
Then there was the time I got hit on by the bi-sexual "performing artist" who best describes his style as a mix of opera/rap/hip-hop/country/rock/ and or  show-tunes if that is even possible... but that's a whole different story entirely.
Point is now that we're 21 and can get into any bar I want.....he still drags me to gay bars.  I have become a regular at the world's oldest gay bar in the heart of my home town.   I mean its pretty close by, the music is always good, and the drinks are strong.
So this weekend I wound up there again.  We use our alter egos, he's Vincent and I'm Veronica (like the Elvis Costello song).  You really meet the best characters at gay bars.  I met this guy who made his "dad jeans" into a vest and went around asking people all night if they liked his design.  It's also fun playing the "man or woman game"  with all the drag queens its actually harder then you think.  OH and you can pole dance there too... but we cut back on that since Vincent has been kicked off the pole a few times.
But I learned a hard lesson at what may have been my last excursion at the gay bar.  Apparently dancing at a gay bar and making no eye contact "sends the wrong signal"  one lesbian informed me.  I'm a little upset over this.  It's a free country and I want to drink my vodka on ice and pretend I know how to salsa to latin music... how is that sending the wrong signal?  Well it looks like Veronica will have to take her business elsewhere.
Although the night did end on a high note..... kind of.  After running out of the "coed bathroom"  due to the discovery of a white substance on the floor,  I ran into Vincent and his squeeze for the evening who informed me that I "look just like Gisele."  See this is why I go to gay bars... the flattery.  It most likely is a lie, but nothing puts a jump in my step like a compliment no matter how far from the truth it is....
Posted by Gabi at 8:53 PM