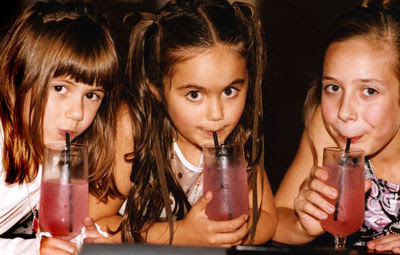 My camp friends were in town this weekend (see picture above that's us at the club).  Honestly my friends from camp are some of the best friends I have.
Interesting night we had.
Started off with a great dinner.  Only we happened to run into some younger campers... small world.  These girls are 16 and hitting up the same bars and clubs we are.  Which made us feel old for a hot second.  But then again we did the same thing.  So we thought we'd be nice.   We told the waiter to send over some virgin Shirley Temples and asked him to wish them a happy sweet 16.   Needless to say they were drinking water.  Great success!!!
So after leaving dinner we headed to my friend's friend's place.  I was bored so I started making fun of people.  I thanked a guy for bringing acid wash back into my life since he was wearing it head to toe.  I pointed out that the reason this guy couldn't put a book down was due to the large font and short sentences.  And asked another guy where her got his "less orange than usual" spray tan.  In other words when I'm tipsy and bored in a room full of people I don't know I make fun of them.  I have a feeling this may get me in trouble some day.
Then off the club.  Waiting outside in the freezing cold before getting picked up by a promoter I pointed out the many fashion faux pas to my friends, "what did she kill for that coat?  Gross."  "Yeah it's defiantly the season for a white mini dress"  "Thank god someone is wearing slut boots."
The club was fun.  I just can't really enjoy myself at a club for more than an hour.  I mean we did it all.  Walked around, checked out all the metro/ euro trash/ possibly gay men, had some drinks, we even danced on the bar.  Then I got assaulted by a security guard.  Complained and got a free vodka tonic.
So off to our next destination.  A bar my mom read a review for in the New York Times and insisted we check it out.  So we went and it was a lot of fun....Thanks MOM!  I also discovered how to use Shazam on my i-Phone which is too cool....until my phone died and I had to charge it in the coat check.  We met some really interesting people.  I even met a fellow writer/performer.  Only he writes and performs martial arts... not sure how that works out....
So we missed the last train.  So we went to get some food.  I picked a fight with some guys at the bar over something I am not sure of, probably their dress attire.  Ordered a stella just so I could yell, "STELLLLLLLLLLAAAAAA" at the bartender.  Then devoured a delish gaucamole burger.
Then off to grand central.  That was closed!  Can you believe it?  We had to wait outside.  Then it opened and we hoped on the train.  Our conductor reeked of Abercrombie, which I fake complimented him on.  But there was a beautiful moment watching the blue of the sky melt to the orange and red of a sunrise.  Poetic I know.
Got off the train at 7am.  Half asleep I somehow managed to drive home.  I had to blast some classic rock to get me there.  But we did it.  Tucked into bed, eyes heavy and tummy full I decided New York is fun but the all nighters have to stop. And I should be nicer to people and their fashion choices.  Not everyone was a fashion correspondent for their college morning show. ;)
Posted by Gabi at 8:37 PM