Why I hate people who go to Starbucks 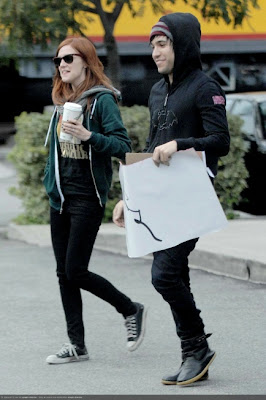 It's 3:50PM.  I have precisely ten minutes to get to class an am faced with a tough choice:  Do  I go to class early to plug in my now dead laptop, or should I stay here in line at Starbucks.
The line is long.  But I am about to crash from being under-caffeinated.  I'm all the way at the end by the door that keeps swinging open with a Boston chill.  In front of me is a balding guy with a Mohawk (bad way to hide a bald spot, Buddy) who totally just cut me.  Jerk.  There are so many people crammed into this small space.  And the line isn't moving an inch.
All I want is two shots of espresso.  Just espresso.  No sugar free vanilla, or soy, or half caf, or misto, or frap or machiatto whatever else people add to their "signature"  over ten syllable drinks.
These people are define the true posers of society.  Just like Ashlee Simpson and Pete Wentz (pictured). They pretend to be nuts about coffee, but they're not.   Instead they are nuts about milk and sugar, which is what happens to a starbucks drink when you make your order over three syllables.   So why don't they stop wasting everyone's time and their five dollars.  These are the true weaklings of the world.  These are probably the same people who consider American Idol winners to be great music, these people most likely bathe themselves in Abercrombie and maybe blast techno music in their mom's SUV (which is totally the new minivan FYI) on the way to da club.  And I know that was just a whole lot of stereotypes, but I'm REALLY decaffeinated right now.
Oh finally.  They can take my order.  And within seconds I am blissfully sipping my hot, frothy, rich espresso.  Ah much better.  I love Starbucks.
Did I just say that?  Crap, I don't want to be one of those people.  I swear I've never ordered a 10 syllable drink..... except for that one time I did to fit in.   And I don't think American Idol winners are talented musicians, but I do have one of them covering Bohemian Rhapsody on my iTunes (see I just saved face by not being able to name which one).   And I don't bathe myself in Abercrombie, although I once dated a guy who did - needless to say that ended.  And I have never blasted techno music in my mom's car........ except for that one time in high school.... hey, we had to get pumped up on our way da club where everyone was "getting tipsy", while "popping it like it's hot"  and "going from da window to da wallllllllll".
Uh oh.  I'm becoming one of them.....
This message has been brought to you by S.A.R.E.  S.A.R.E  because  Starbucks Abuse Resistance Education
and now I'm late to class
Posted by Gabi at 9:51 PM