I really outdid myself this year 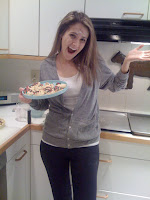 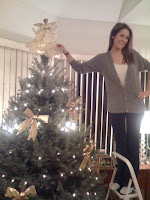 As I mentioned earlier - I am a holiday hype hater.
Which is why I like to leave my christmas shopping/ cooking/ decorating to the last possible minute.
This year was no different.
I decided that rush hour was the perfect time to begin my holiday shopping.  So after sitting in bumper to bumper traffic singing along to Elton John "Amoreena"(thanks to Dog Day Afternoon, my new favorite jam of the moment)  I finally made it to the Stamford (as in The Office) mall... after passing it about four times.
Then there was the parking lot.  Obviously there was no spaces.  But luckily I found one.  Actually I'm not sure if it was supposed to be a "space"  it said for "compact cars only"  and my old school Volvo's huge hood isn't really "compact" but several three point turns later, I somehow managed to wedge in there.
The shopping was overall smooth.  The biggest line I encountered was at Starbucks, so I skipped the doppio.  I was also going to see Santa - you know just to check in.  But the line was too long, and I was the only one over  the age of ten who was not accompanied by a small child.  I guess I'll have to wait until next year to ask Santa for that BB Gun (still waiting to see the Christmas Story TBS... still waiting...)
So after I finnished my shopping I went to go find my beloved volvo.  But I forgot where I parked.  That always happens.  I remember starring at the sign for a really long time.  Writing a mental note.  "Okay so I'm parked at some color with some number and some direction".  I  passed the meter maid and was tempted to ask "excuse me.... sir can you please help me find my hunter green volvo?  It's wedged in a make-shift parking spot and is most likely crooked and sticking out?"  But I decided that might get me a ticket.  Three parking level strolls later, and alas there it was!  I had to use the best of my yoga skills to work my way into the vehicle.
But the fun didn't stop there.  Somehow, and I'm still not sure how.  I wound up in south Stamford.  And as I learned today the southern part of most towns is usually the "seedy" part.  Five KFC/Taco Bells  later  I finally found the highway and my way home.
Which is where the real fun began.  For the past 20 years I have 3 Christmas duties:
1.) Put the Angel on the tree (see photo)-  which is followed by a "I hate that you still make me do this" annual snapshot and my Mom fixing it for 20-30 minutes
2.) Stage the nativity scene - But the clay baby in the manger was being such a diva... who does he think he is? Jesus Christ?
3.) Make cookies - and make a mess (see photo)  This year I managed to get more sprinkles and frosting on my face than the cookies... still not sure how that happened...
So as you can see I really outdid myself this year!
Actually not at all but thats totally something my mom would say.
Most importantly, I need to work on my motor skills both on the road and in the kitchen....
Posted by Gabi at 8:57 PM