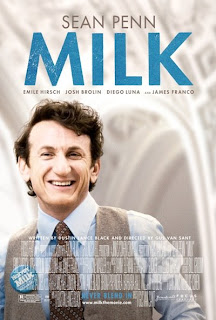 I saw Milk tonight.
Compelling.
And I mean it.
This movie affected me.  It takes a lot for a film to affect me these days.  Usually this happens if the film itself feels true and real.  Almost every element of Milk from the 1970s footage, to the incredible dual perspective reflection shots, to James Franco's fro felt authentic.
But I wonder if the rest of the country was as affected.  Is this film powerful enough to change minds?  Everyone I spoke to about Milk seemed to feel the same way.  But these people come from a similar liberal costal background like myself.  I'd love to be in a theater in middle America and see how the crowd would respond or feel after.   I can't help but wonder what if this film was released before election night.  It was possible.  Would the on vote on Prop 8 have been different?  Or was the timing perfect?  After seeing Milk do we now crave change?  I don't know about you but this film made me want to riot and get on a soapbox that actually read "soapbox."
While I did love this film  I did have some issues:
1.  Emile Hirsch - was this absolutely necessary?  His work no where near matched Penn's or Franco's.  Hirsch was playing the attitude of a stereotype.  He lacked genuine character.  Maybe Hirsch should  go back Into the Wild.
2. The Real Anne Kronenberg Was Hot - so how does a very plain looking Alison Pill's bland performance and frumpy wardrobe fit that?  Again another stereotype.
3.  Not Enough Beards - While Franco's creepy mustache was hot in a weird way, the 1970s facial hair I know and love could have been a little more.  Or maybe mustaches are the new beard?  If only mustaches were easier to say without sounding like a tool....
4.  The Opera- I had no idea how it fit the film until my friend (who is an opera major) explained it to me.   It's about dying for your art and your art still living when you die.  Milk essentially did this.
Overall amazing work.  Oscar noms for sure.  But if Emile gets one I might start a riot.
Posted by Gabi at 10:27 PM