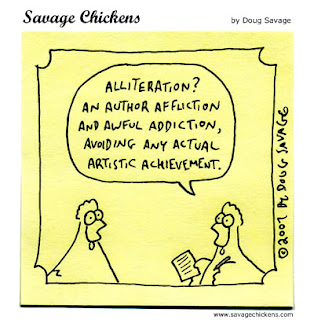 I apologize in advance if this comes off  a little Sex & The City , but I assure you just like a good pair of stilettos this post has a point.  ;)
I just finished watching 27 Dresses with my boyfriends Ben and Jerry.  Followed by a hour of Sex
...and The City.
I know some night I'm having.
My chick flick fiesta made me realize something.  Why is it that media for women always seems to have dumbed down dialog?  I have the feeling this choice is based on the same logic of why the news is filled with alliterations: "Weather Worries" "Drenched by Downpours" "Beer on the Bus?" .... sound familiar?
As  a journalism major I learned to use alliteration to catch your  "stupid short attention span audience" with  catchy catchphrases.  I feel this same technique is used in a  Sex and the City script.  If the puns don't grab you, "I'm good at crossword puzzles.  I'm not so good at people puzzles."   Then the alliteration will: "Later that evening the couple I was in had a couple of hours to plan a dinner party for a couple of couples"
Oh sorry that's repetition --- shouldn't there be a limit on the amount of times you use "couple" in a sentence?
So why do we do this?  Is the female viewer just too stupid or has too short of an attention span to listen to well phrased english sentences?  Do we crave those clever alliteration and pun filled witty sentences?  If so how many people do you know that actually speak like that?
Which leads me to conclude chick flicks and Sex and the City may be  frankly fiction, but alliteration is always  awesome.
Posted by Gabi at 9:00 PM

Labels: alliteration, sex and the city.