MY GPS IS SEDUCING ME 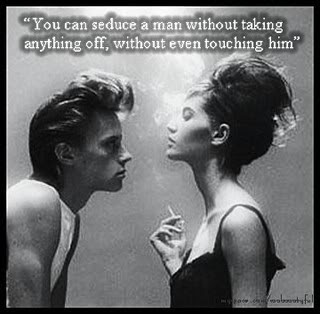 So I used to hate my GPS.
That was when it's voice was set to this proper robotic bitch.  I named her Elspeth after my bitch of a Montessori School teacher who wreaked of sardines.  She once gave me a time out because this boy bit me and I bit him back.
Elspeth the GPS was just as rude.  She would receptively shout at me to "Turn left on 'la chiniga' (la cienega, she can't even speak properly) "  when there was oncoming traffic.  What was she trying to do, get me killed?  Good thing I didn't listen.
And sometimes I would be driving down a street.  And she would just give me the silent treatment.   Come on, couldn't she at least say "good job!"  or "my, what a great driver you are." Nope, just silence.  And then all of sudden she would spat out "recalculating!" Um what?!  What did I do?  You weren't talking to me, how did I make a wrong turn if I was just going straight?
And then Elspeth died.  No seriously.  She took me home.  Then I tried to use her a few hours later and nothing.  Dead.   Which was a problem, because I have a very bad sense of direction. I'm also not a great driver.  The "nice" road hours instructor Little John (who was actually rather large and in charge, but not as large as Big John who was just morbidly obese  and used to take "shit breaks"  in the middle of your road hours).  Anyway Little John told me the day before my license test that "It would be a miracle if you got your license tomorrow."   And I got it!  So I now believe in miracles.  Since you came along.  You sexy thing.
I have the worst sense of direction.  I am one of those people that walks into a store, walks out and then can't remember what direction she came from.  This is hazardous at malls.   I am lost in LA without my GPS.  I even need it to direct me to the Trader Joe's across the street that I can see from my driveway.
So as much as I hated Elspeth, her death was a huge inconvenience.  I had to use my iPhone as a GPS and while driving, and that's just not safe.
One of my friends tried to resurrect Elspeth for me.  But all he could do was change the car on my GPS  screen to a monster truck and make the voice male Australian (as per my request).
So I had to call the people at Garmin.  They told me my expected wait to speak to an actual person was 35 minutes.  35 minutes, really?  What am I waiting for a table for a party of five at Stephanie's in Boston for a Saturday brunch and not my entire party is present?  Fuck that.
But I waited, it's not like I had anything better to do.  After listening to scratchy elevator renditions of Nancy Sinatra's "You Only Live Twice"  more than twice, I was then forced to buy the original on iTunes.  Halfway through my purchase I heard the voice of a live human being on the phone.  I overly enthusiastically responded and cracked a joke to which he ignored. I was a little bummed that the technician didn't have a sense of humor.
Then he told me, since I have a Mac he couldn't help me.  This is the first time I ever felt discriminated for having a Mac Book,  I thought this was Apple Nation.  So then I had to wait another twenty mintues which I spent lip syncing to "You Only Live Twice" and coreographing an interpretive dance to the strings part of the song.
When I was finally put in touch with a Mac Specialist, we instantly bonded.  We shared screens and everything.  I think he was a little creeped out by my hiarchy of beards desktop, which I refuse to change.  Anyway, now my GPS works.  I was so excited it was fixed that I instantly used it to direct myself from the kitchen to the bathroom.  It not only worked it also seduced me.   My new GPS Voice.  The Australian.  What a hottie.  I named his Hugo or as I like to call him Hugo the Hottie.
Unlike Elspeth, Hugo treats me right.  Everything he says is seductive.  Instead of saying "one oh one"  he says "one hundred and one", such a gentleman.
Seriously all Hugo has to say is "Turn left" and my clothes are off.  This might cause a problem on the road.  But I can't help myself.  Hugo is seducing me.
Ah but now today my printer broke.  Do you think when I get it fixed I can set it to a sexy Australian voice too?
Posted by Gabi at 11:55 PM