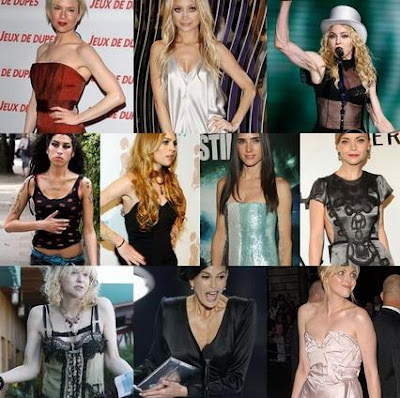 Crash diets.
You know, they call them "crash" diets for a reason.
In LA everyone always seems to be dieting.   Either they're clearly clensing, really raw, very vegan,  Carbless, Fat-free, only organic, just Jamba Juicing, soley Starbucks, craving Cupcakes, purely Pinkberry, guzzling Grapefruit, or just not eating anything at all.
Before moving to LA I always thought I was skinny.  But by LA standards, I'm "skinny fat".
It hit me when someone told me I looked like the girl from "The Secret Life of An American Teenager".  You know, the pregnant one.
See LA skinny is borderline repulisive. The look here is basically a skeleton drenched in designer and pouting with a fresh coat of crayon red lipstick which makes her pale skin glow like snow. Her hair is either highlighter yellow or blackout black.  Most likely she's tripping over her too tall Louboutins as she tries to balence to the glitzening gold chain of her quilted Chanel bag.
Boys, is this sexy to you?  If you think flannel is formal your opinion doesn't matter.
LA skinny isn't and never will be me.  I like food too much.  I tried the whole Organic Vegan thing, AKA the Skinny Bitch Diet, which should really be called "I'm skinny and a Bitch because I don't eat any thing."  After day two of the diet, I could barely remain conscience.
My love of food is attributed to my  Grandmother Antoinette who used to tell me "Gabrielle," her Brooklyn-ese accent disabled her from pronouncing my real name, Gabriella, "how do you know you don't like something until you try it?"  Ever since she told me that I have become an adventurous eater.  I tried everything.  In fact I tried too much.  My afternoon snack would be a cup of whole milk and about 10 Oreos which I used to mash up at the bottom of my glass of milk and eat with a spoon like pudding.
Needless to say Grandma was technically obese.  She would eat an entire BJ (Costco for those outside of Fairfield County) sized tub of pretzels, drenched in mustard and wrapped in cheese, in one sitting.  It's actually quite delicious.  She also qualified rolling on the floor as physical activity, an exercise inspired by either an infomercial or just her old age laziness.  After a demonstration, my "large and in charge" grandmother rolled right into a vase which shattered, along with her dignity.
So yeah, diets aren't really my thing.  I took an nutrition class in college.  My teacher's last name was Dong.  She hated me because I always rolled into class fifteen minutes late.  You could hear the clink clink clink of my high-heeled boots up the hall.  I couldn't tell you Why I was wearing heels to class when there was ice on the ground.  I think it was part of my sophomore year fashion identity crisis.  I would also wear tops as dresses, need I say more?
I would burst into the classroom apologizing profusely and claiming I hit traffic, as I held up two venti sized Starbucks, one for myself and one for my friend Kim.  The funny thing was I lived on campus and class was two blocks away.  So by traffic I meant the clump of Emos smoking cloves outside of my dorm, and the long line of ten syllable orders at Starbucks in City Place.
I'll never forget the day in nutrtion class where I learned my favorite brunch order from Trident on Newbury, an oversized avacado and dill havarti cheese egg white omlette was by no means healthy.  Dong told me my omlette's fillings essentally defeated the purpose of the egg whites.  I still miss those omlettes.
I didn't really learn much in nutrition.  Just that I drank too much coffee.  Apparently an average of 7 shots of espresso a day isn't really considered healthy living.
But honestly, diets are stupid.  Why start a diet if you're just going to break them anyway.  If you don't believe me check out what my friend Courtney brought this to my attention yesterday.  A list of six of the craziest crash diets of all time, brought to you by cracked.com.
http://www.cracked.com/article_15780_6-most-insane-crash-diets-all-time.html
The list is pretty insane. Basically all of these ancient "diets" translate into disorders:
1.) The alcohol diet = Alcoholism
2.) Vomiting= Bulimia
3.) The Graham Cracker diet=Anorexia
4.)The Chew diet= Stupidity
5.)Tapeworm= Extreme Stupidity
6.) The Sleeping Beauty Diet= Coma
All this talk about food is making me hungry.  What fast food chain should I cause havoc at tonight?
Posted by Gabi at 11:59 PM